Have you read the first three books in my Protector Sweethearts series? Now you can binge-read all three via Kindle Unlimited, or buy the set for US$9.99 on Amazon. 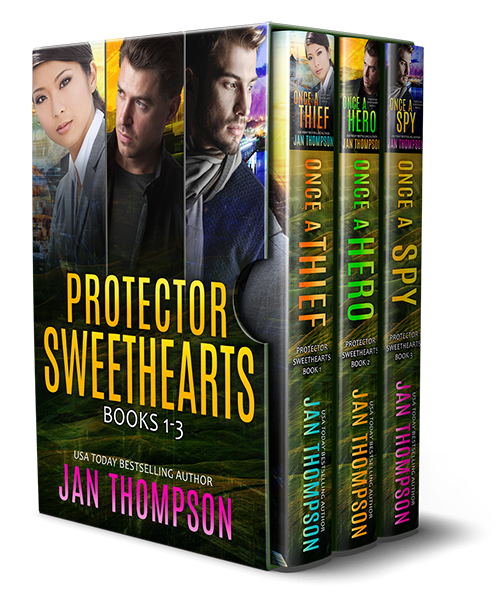 A thief, a hero, and a spy in one boxed set collection.

ABOUT THIS BOOK
The first three Christian romantic suspense stories in Protector Sweethearts invite us into the world of adventure seekers as they hunt for lost treasures.

A private investigator looking for her missing mother. A reformed art thief getting a new lease on life. Twelve bejeweled eggs with secrets of their own. She sets a thief to catch a thief. Will he also steal her heart? Private investigator Helen Hu must team up with art thief Reuben Costa to rescue her mother, who has vanished while trying to make amends for stealing some bejeweled eggs fifteen years ago.

An adventurous billionaire on a mission. A former CIA agent finding her bearings. Treasures lost to time. Hired to protect her employer’s older brother, former CIA agent Raynelle Dryden gets too personal with him in a treasure hunt, and both inadvertently introduce the other to their old enemies in this Christian romantic suspense.   Books 4-6 are coming soon.
Sign up for Updates
Look Inside
Disclosure of Material Connection: Some of the links in the page above are "affiliate links." This means if you click on the link and purchase the item, I will receive an affiliate commission. I am disclosing this in accordance with the Federal Trade Commission's 16 CFR, Part 255: "Guides Concerning the Use of Endorsements and Testimonials in Advertising."
Scroll to Top